Alex Falcone is the only comedian and writer living in Los Angeles (probably). He recently made his network television debut on The Late Show with Stephen Colbert, which is a pretty big deal. 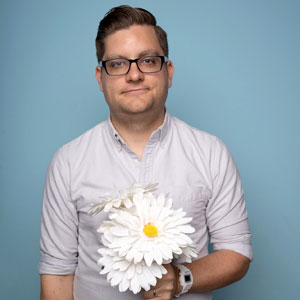 He was also on a handful of episodes of Portlandia on IFC a little while back. That was fun. Oh, and he won Portland's Funniest Person in 2018, which was big news there but you may not have heard about up here. Trust me, though, it was a big deal.

As if that wasn't enough (it wasn't), he hosts the podcast Read it and Weep--which used to be about books--and is the author of a young-adult romance novel about a mummy called Unwrap My Heart that Publisher's Weekly called "unfortunate."

Despite these modest accomplishments, he's somehow remained down to earth and approachable.